The first couple of months of rehearsals were a lot of hard work and progress was slow as we struggled to learn all the words and music. But then something wonderful started to happen. Practices became something that we all looked forward to each week. We began to bond together with a fellowship very much like a brotherhood. We hated to miss a practice; not because we thought we would fall behind but because we hated to miss out on the camaraderie.

This mutual feeling of brotherhood continued as we presented "Joseph" six times during February and March of 1997. Each one of us felt a certain loss when it finally sunk in that we were done; that there would be no more rehearsals or performances.

To help fill the void that we felt once "Joseph" was over, eight guys from the cast and crew got together one Wednesday night in April to sing. We didn't know what songs we were going to sing or who was going to sing which part, but we were going to get together. Only the Lord really knows how we settled on eight members. He must of had other plans for the rest of the cast and crew.

We asked Fran Davis to join us as our accompanist. We told her that we wouldn't need her very long. Just four or five weeks, six at the most to help us learn some of our songs. Our first performance was in June of 1997 at a joint worship service for the First Christian and First Presbyterian Churches of Gibson City.

From that point, we have been on a wonderful trip with our Lord Jesus guiding each step of the way. We don't know exactly where our journey is heading, but we do know that we will grow where the Lord has planted us and that we will continue to share His love through music, words and fellowship. 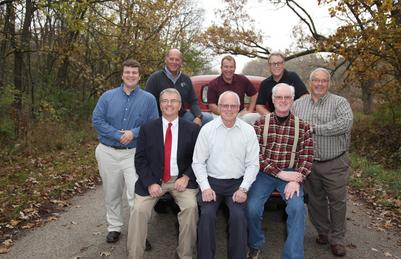 In October of 1996, a small group of community players from the Gibson City area started rehearsing "Joseph and the Amazing Technicolor Dream Coat". The musical is a modern day opera filled with song and dance about Joseph and his eleven brothers, all who were sons of Jacob. Under the guidance of executive director Jean Stocker and music director Krysti Brucker, the cast and crew began one of our most challenging productions.